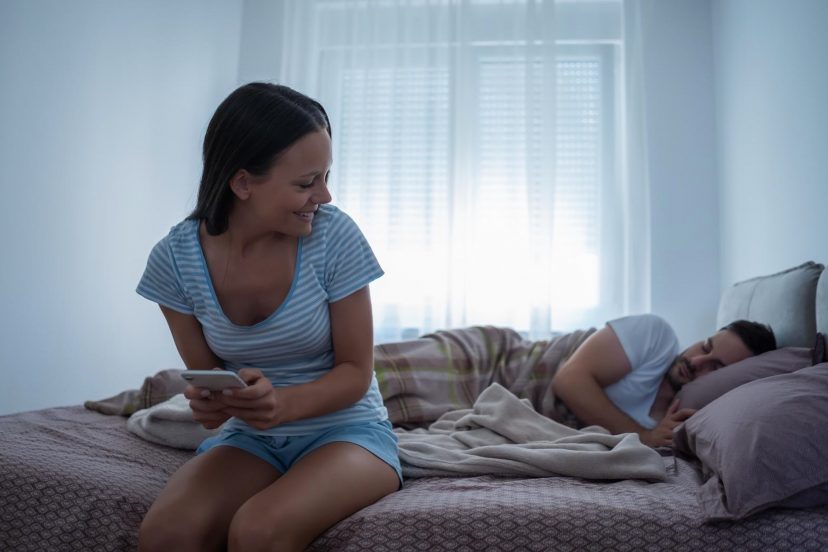 If you suspect a cheating girlfriend in your life this article will provide nine telltale signs that your suspicions could be proven right.

But we warn you to avoid going in like a “bull charging at a gate”.

There may be reasons why she’s acting different that she will get around to telling you.

Or, maybe she won’t. But being aggressive with her will achieve nothing and it will land you in trouble. Be sensible about this. Yes confront her but do it in private and in a calm manner.

Yes that will be hard if she confesses but if you have any hopes of making your relationship work then by being calm about this is the best thing you can do. It will shock her and make her wonder what is going on?

Actually, she’ll look at you differently, even respectfully. That’s a good thing if you want to impress her enough to to keep her in your life. But right now, you’re suspicious so here are nine signs of a cheating girlfriend you need to take notice of.

Signs Of A Cheating Girlfriend – She Becomes Defensive A Lot

Your girlfriend may be very good at hiding it but deep inside she feels guilty for cheating on you with another man.

She tries to hide this feeling by acting like nothing happened. If your girlfriend starts talking about how much fun she had while having sex with someone else in a past relationship, then you should know that there are some red flags here.

This means that she has probably been unfaithful before. If your girlfriend has cheated on you with someone else, it can be very difficult for them to accept their mistake.

They may feel guilty and ashamed of themselves. This makes them want to hide from everyone they know so no one would find out about their secret affair.

They might also start acting differently around you because they don’t want anyone to see how much pain they are going through right now.

And the big giveaway is when they get so defensive they accuse you of cheating. That’s why I’ve listed this as the number one sign of a cheating girlfriend.

If she becomes erratic at keeping her appointments with you, chances are high that she has someone else who takes care of her schedule.

This could mean that she doesn’t have time for you anymore.

This may seem obvious, but many couples don’t realize just how much time they spend together when they’re dating. So, if you notice that your partner is consistently showing up late or missing out on dates completely, it’s best to take note.

Her Phone Manner Has Changed

She used to call or text you all day long every single day. Nowadays, however, she hardly calls at all unless something urgent comes up.

And worse still, she either doesn’t take your calls or cuts you short with an excuse that she is busy. If she says she’ll call you back and doesn’t and does this frequently, that’s not a good sign for the relationship.

You may start feeling as though something important is missing from your life because you cannot seem to find any reason for this change in behavior.

A Cheating Girlfriend? Has Her Appearance Suddenly Changed?

Another sign that you are dating a cheater is when she starts changing their physical appearances.

This could be happening because they just care about their appearance. Or they could be changing the way they look because someone else could be in the picture.

They may start wearing new clothes, buy more expensive perfumes and cosmetics, get themselves waxed or pedicured. All these things will help them feel good about themselves. But is it being done for your benefit?

She Suddenly Becomes Possessive With Her Private Stuff

She doesn’t want anyone else looking at her private stuff. When you ask who she is texting or who she just spoke to and get silence, it might be time to worry.

Or if she gets a call and lately has been getting up and going outside to take it, that’s a red flag.

Or it could simply be nothing. But when she has started changing her routine and the way she takes and receives calls and texts, that’s suspicious.

She Has Been Ignoring You Lately

This can be very annoying if your relationship has been going well but suddenly she starts avoiding you whenever there are some problems in between.

This could mean that she wants to avoid any kind of conflict with you. You have always had good communication with each other but suddenly things change.

This could mean anything from arguments over petty issues like who will pay for dinner. It could mean she is feeling guilty about something. If you’ve been together for any length of time, this behavior is more suspicious. Especially when it suddenly begins to happen.

A Cheating Girlfriend Could Become More Aggressive With You

This can mean many things. If your partner seems to pick fights with you all the time for no apparent reason, this could indicate that their feelings towards you aren’t as positive as they should be.

It can also mean that they’re not happy in the relationship so they’ll do anything to make sure to keep you at arms length.

Or anyone of the following:

If she’s still interested in you but has no interest in everything else around her, she could be losing her caring nature.

It could be because she feels neglected by you or maybe she just wants someone who will take good care of her.

Either way, this can lead to problems if you don’t do something soon enough. If she is no longer interested in helping you with your problems, it means that she has lost interest in being there for you.

When this happens, you should be worried.

If she is losing interest in what you have to say, then maybe she has found conversation elsewhere more stimulating.

This will eventually lead to more serious issues between the two of you. One of them could be that she is finding her solace in the arms of someone else.

Sessions “In The Sack” Have Become Few And Far Between

If you notice that your partner has started avoiding intimate moments this may be a serious sign.

Or even if they do not avoid them completely but their interest towards such moments has decreased significantly, it could be time to worry.

This can also happen when one person wants more than what the other person is willing to give or vice versa.

If you notice that intimacy has started decreasing over time and you feel like things have become more distant than they used to be, then this could mean that your partner may not want to share her feelings or thoughts anymore.

This can happen when one person feels as if she doesn’t need to open up any longer. After all, their partner already knows everything about them.

Or, she could be finding that intimacy somewhere else.

So, Have You Got A Cheating Girlfriend?

There’s nothing worse than being cheated on by someone you love.

But at the same time, there’s also nothing more devastating than having an affair happen while you thought everything was fine.

When this happens, you’ll likely experience feelings ranging from anger to sadness to betrayal. These emotions may seem overwhelming, but they won’t last forever.

When someone breaks up with you, it hurts. That’s a fact.

But at the same time, you should also realize that it doesn’t mean that everything is hopeless.

Instead, it means that things are changing.

Don’t be afraid to confront her. It may seem harsh but confronting someone over something they’ve done is actually pretty normal.

When you confront someone, you’re essentially telling them that you care enough to tell them why you’re upset or angry at them.

Again, the key here is to remain calm. If you are not sure you can be calm then you may want to ask someone you trust implicitly to confront her.

But make sure you have reasonable evidence that she has been cheating otherwise you risk damaging bridges. And you may never be able to mend them.