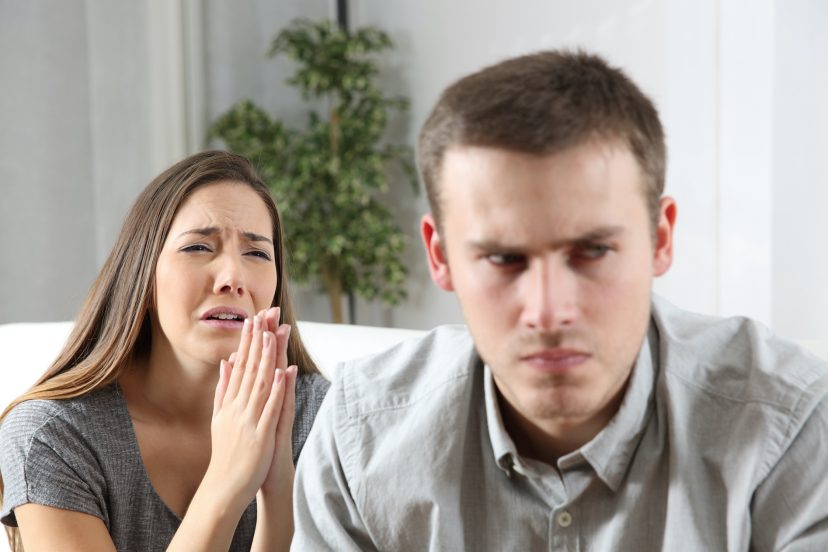 My wife cheated on me so what should I do now?

This is a question sent in by a guy going through a pretty tough time in his relationship.

He’s just a couple of years into his marriage and by accident, discovered his wife having an affair.

Needless to say, he was beside himself and had no clue how to deal with a cheating wife.

“I caught my wife cheating!” he exclaimed in his email.

And his question was – “she was unfaithful and that’s hard to come to terms with. Should I leave or should I stay and try to make it work?”

My Wife Cheated On Me – Now What?

My wife cheated on me, now what? The impulse for most would be to leave but as clear-cut as it sounds, maybe it’s not the right choice in the heat of the moment.

Why? Here’s a shortlist of why it’s a difficult decision to make:

Unless you’ve been through a situation where cheating has stained your relationship, it’s really tough to offer advice and most would take the high road and declare…

For most, on the surface, it’s not a decision they are willing to make in the heat of the moment.

In many cases, that is the right decision because it’s always best to let things simmer down and approach decisions with a clear mind.

How To Forgive A Cheating Wife?

For many men, even declaring “my wife cheated on me” would be the hardest thing they’ve had to say and remember, with guys there is still a lot of pride here and a cheating spouse would be a blow to the ego.

The answer is yes but it would be with great difficulty. Fighting through the hurt and betrayal is almost impossible, especially in the early stages after an indiscretion as you’re immersed in self-pity and “woe is me” plus, the last thing on your mind is forgiveness.

Firstly, if you are still in love, then eventually you can forgive.

And as strange as it may sound, many people in love with their spouses who get hurt through infidelity will actually be mindful of not playing to hard to get back.

That’s because deep down, they want the relationship to continue. Isn’t that strange.

Secondly, if you’re borderline in love or really don’t have real feelings for your spouse, then the decision is easy.

And it may be time to “divvy up” and go your separate ways.

Going Back To Normal After My Wife Cheated On Me?

I’m going to relate my situation but again where one size does not fit all.

It may help and it may not, but in the end, the decision is always going to have to be left to the two people involved.

Short answer is, yes it can but watch the minefields as they can tear your emotions apart.

Be careful of receiving one-sided advice, especially from those closest to you. The problem with getting advice from family and friends in one word is…

One side will be sticking up for their team and other will be rooting for theirs. That makes looking at it realistically VERY tough.

This is why it’s always advised you take time out to clear your head.

There are stages of grief you’ll experience and making rash decisions on emotion is never a good idea.

So yes, a relationship can return to some semblance of normality but there’s no quick-fix. It takes time. Are you willing to be patient?

But I Still Love Her?

So back to that earlier situation…

I had to deal with infidelity just two weeks into my engagement.

I left immediately and thought it was done but a week later, she showed up at my door and yada, yada, yada, we reunited and later got married.

She was persuasive and if this story ended there, then I want to say we lived happily ever after.

But it didn’t. We had a child a couple of years later and while he’s the apple of our eyes, the truth is, the marriage was never going to work out.

Is My Wife Still Cheating On Me?

The biggest problem was we didn’t deal with the initial indiscretion. I “rolled over” and pushed it to the back of my subconscious. I didn’t seek any counsel or advice from anyone, not even my closest confidantes.

No one even knew anything about it as we kept it quiet. I worked in a profession where I was in a way, public property. The embarrassment I thought at the time, was not worth going through.

More importantly, the hurt to our parents would have been even worse.

What was the answer?

With the advantage of hindsight, walking away and staying true to the initial reaction was the right thing to do.

But again, unless you go through something like this, that’s easier said than done.

Can I Trust My Wife Again?

What would have been the benefit of walking away?

Well, in thirteen years of marriage the indiscretions continued. My wife cheated on me more than once. Without going into raw details, once the baby came along, leaving was nigh on impossible.

The chance to catch the initial boat and leave was gone.  After all, it was just two weeks into an engagement. We both would have moved on without too many problems.

But when there are kids involved, a home together, another few years of history together including each other’s families, friends, social connections…you get the picture, it just becomes harder and harder to make a decision and the only decision you feel comfortable making is staying – just because it is comfortable.

I’ve often thought about what I would do if I went back in a time machine to that first indiscretion and the answer is always…I would have left.

It would have saved a lot of heartache and hurt.

Some say “well, what about the kids, they wouldn’t have been born”.

True, and that is something that can’t be answered.

But the biggest difficulty it presented and made the decision hard to live with was the constant suspicion. It never really switched off.

Every time she got a phone call: every time she left the house; every time I called her at work and she wasn’t available to take the call, my suspicions went through the roof.

My personality changed. From happy-go-lucky to suspicious and with the look of a sad puppy every time I went out into public.

One becomes really self-conscious even hating the world. Remember the “woe is me” remark earlier?

Withdrawing from a lot of social engagement followed and depression became a factor big time.

There was some development of bitterness towards people; feeling angry a lot…all because this dude wanted to maintain a “false sense of everything is okay”, you know, doing it for the family.

Thankfully, fate intervened and as things worked out, I was eventually freed from an existence which felt like there was a dark cloud hanging over me. Remember, this went on for thirteen years.

It still pervades the mind occasionally but time has certainly healed any hurt. At the same time though, thinking you’re doing the right thing actually turned out to be a silly decision.

In the end agreeing to let this charade go on any longer wouldn’t have been a smart thing to do and “to hell with what people thought”.

So the question back to the reader is…

…is this something you think you might want to go through?

Can A Marriage Go Back To Normal After Cheating?

Expecting your marriage will go back to normal is wishful thinking.

Would staying together make sense or would you just get into that space where you are wondering where she is, who is she with, where is she going?

On the other hand, your situation might be different. I convinced myself there were reasons to stick around but looking back, what was really being said silently was…

…”it was just so easy to stay. I love her deeply. We’ll just let this slide”.

And yes, all the reasons, all the do’s and don’ts when it comes to trying to get to the bottom of why cheating happened in this marriage were examined over and over again.

It was all to no avail.

5 Things You Should Do Before Making A Decision To Leave

Before making any rash decisions, check out these five things you should do before making a decision to leave your partner.

1. If you are considering whether or not to leave your partner after cheating, it’s important to remember that cheating is never the right thing to do. It’s important to weigh the consequences of remaining in a relationship with someone who has cheated against the potential benefits of moving on.

2. Talk about your feelings with your partner. communicate honestly and openly about what you’re thinking and feeling, and let them know that you need time to process everything. This will help ensure that they understand your decision-making process and support you during this difficult time.

3. Make sure you have a solid plan for moving on. This includes figuring out how much money you’ll need for living expenses, where you’ll go, and how long it will take to find a new job or apartment. Having a plan will make the transition easier when the time comes.

It’s a tough situation. One-sided relationships where one person is in love are not a good idea and they are not worth the pain and hurt.

If you’re in this predicament then I say good luck with whatever decision you make. It’s yours to make.

The only advice I have is…is this something you think you might want to go through? Really think deeply about whether your relationship can work and be brutally honest. Otherwise, there could be some years of heartache ahead.