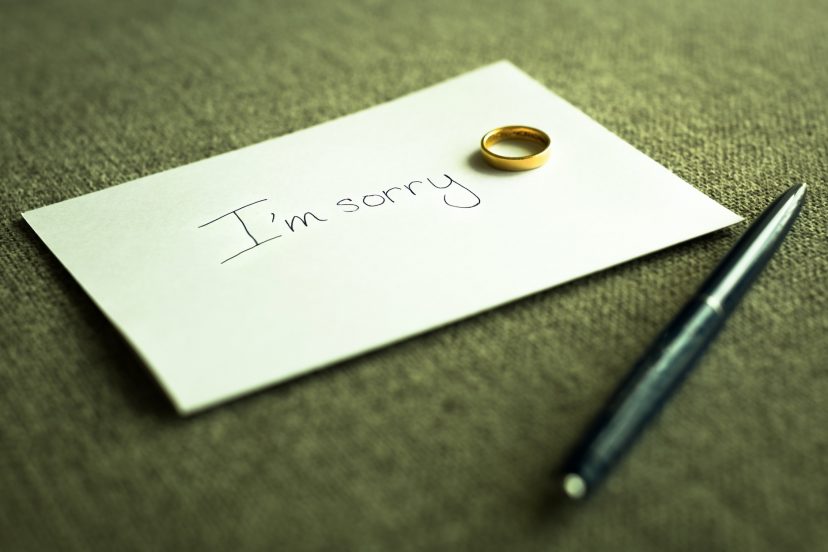 There are five things you need to include in a breakup apology after you get dumped.

This of course is if you’re in the wrong.

And if you’re reading this then you probably are.

I’m not here to point blame at anyone.

Just to give you some guidance so you can start to salvage your relationship or marriage.

And then an example of what not to do when you’re trying to save your marriage after getting dumped.

What You’re Breakup Apology Must Include

To avoid killing your relationship with an apology here’s what you need to do in a nutshell:

That’s basically all you need to do in the initial stages of your breakup apology but in reality, it’s still only the first overall step.

That doesn’t seem too hard does it?

By now, half the people reading this page have probably left.

Acknowledging to yourself you are in the wrong is tough for most people to accept. I can understand that.

Truth is, the other person probably did have some involvement in the relationship being in trouble.

If you’re serious of course.

Do you really love them?

Do you really want them back?

What are you willing to do to make it happen?

Your Breakup Apology Must Be Sincere

It’s amazing how the demeanor of the other person will change just knowing you’re sincere with your apology and willing to change.

You’ll often hear many people in trouble in their relationship say “well, I said I was sorry…”

But just saying sorry won’t start the healing process. It’s like putting a bandaid on a deep cut.

Eventually, it will reopen.

You need stitches to commence the bonding in the flesh. Then you need to nurse it until it’s fully healed.

The following example happened several years ago. It unfolded right before my eyes.

Tom Killed His Relationship With A Breakup Apology

Several years ago a situation arose where my wife and I were due to go on a cruise with close friends.

We’ll call them Tom and Jenny for anonymity’s sake.

A week before the cruise, Jenny asked Tom for a divorce.

We thought the cruise was off. Wouldn’t you?

Jenny decided to honor her commitment to go on the trip and for Tom, this gave him an excellent opportunity to make things right.

Jenny had grown tired of Tom’s constant whining and demands.

She said he had become self centered to the point where nothing she said or did would make him happy with her.

She felt trapped in what she thought was a loveless marriage and just wanted to get out.

The cruise date arrived – we all boarded and were ready for five days and nights of what we thought would be “cruising hell” traveling with a bickering couple.

As it turns out, Tom did some legwork in the week leading up to the trip and really made an effort to change his ways.

He knew Jenny was serious especially as she had already made arrangements to move in with her sister.

When we met them on the ship, things just didn’t seem right. They were actually holding hands and appeared very much in love.

That’s not what we expected to see and we were extremely relieved.

But that relief was going to be short-lived.

Tom thought he had done his job and what ensued over the next five days was a lesson in how to sabotage your relationship after you’ve saved it.

Tom got comfortable. He thought all he had to do was make an apology, whisper a few “sweet nothings in her ear” and perform some chivalrous actions in the early stages and that would be enough to get Jenny to change her mind.

Tom was a very charming guy.

He was half right. All Jenny wanted to know was that he still loved her. He needed to change and for a week, he did. But his arrogance and misunderstanding of how Jenny was really feeling was his undoing.

By the end of the cruise, Tom was not just on the outer, but out of the ball park. Jenny rode home with us and the divorce happened in a hurry shortly afterwards.

So what did Tom do wrong?

He was insincere. Yes, in the beginning he accepted full blame for his actions and the way Jenny felt but his ego was such that as soon as he had her back in his arms, he was going to get confirmation from her that the way he was, wasn’t really his fault, but she was really to blame.

His breakup apology suddenly became all about him. In other words he said “I apologize but…”

The Apology That Fast Forwarded Up A Breakup

That word “but” is the bane of many relationships and when it comes to apologies, it should never be in the conversation.

When you are apologizing it needs to be sincere. Your partner needs to hear sorry without the but and then the clincher…you need to accept responsibility.

And this is where most people trying to get their foot back in the door of a relationship screw up.

You see, saying sorry gets their attention. But it’s not going to hold it. They need confirmation you’re sincere and by taking responsibility for your actions, you’re confirming that the sincerity in your apology is real.

Tom didn’t understand this and even with a few words in his ear from yours truly, he dismissed it as “poppycock” and tried to convince me that she needed him more than he needed her.

“Good luck with that train of thought buddy!”

Ego and arrogance was Tom’s undoing.

He turned an un-lose-able situation into an unbelievable loss simply because he couldn’t take responsibility for his behavior. He simply couldn’t admit he was in the wrong.

Jenny picked up on his deceptive ways almost as soon as the cruise started.

With Tom zeroing in on a mission to use the next five days as simply an opportunity to clear his name, and get Jenny to accept responsibility for the way he was – and then just pick up where they left off, well, that is the height of all arrogance.

And we witnessed it all.

So in summing up, you’ve been dumped because of something you did. What are your first instincts?

For most, the answer is to apologize.

Apologies are the stepping stone to the reconciliation process.

If you think all you’ve got to do is say “I’m sorry” and she’ll come running back into your arms, you may as well save your breath.

Apologies are the first step to getting back into the arms of your partner.

But on their own without another important ingredient they are pretty much useless.

So the five steps of a breakup apology –  be sincere, acknowledge you are in the wrong, avoid saying but, accept responsibility and then ask for forgiveness.

And that’s basically still just the first step because now you need to follow through with your promise to change your ways.

Don’t do what Tom did and sabotage your success.